Controlling a single hero or a squad in an RTS is no challenge for you? How about 32000 drones?

Drone Swarm is a new kind of RTS game recently released by stillalive studios. We visited lead designer Julian Mautner in Innsbruck and talked to him about the benefits and challenges of a totally new game concept, and how articy:draft is used within the project. 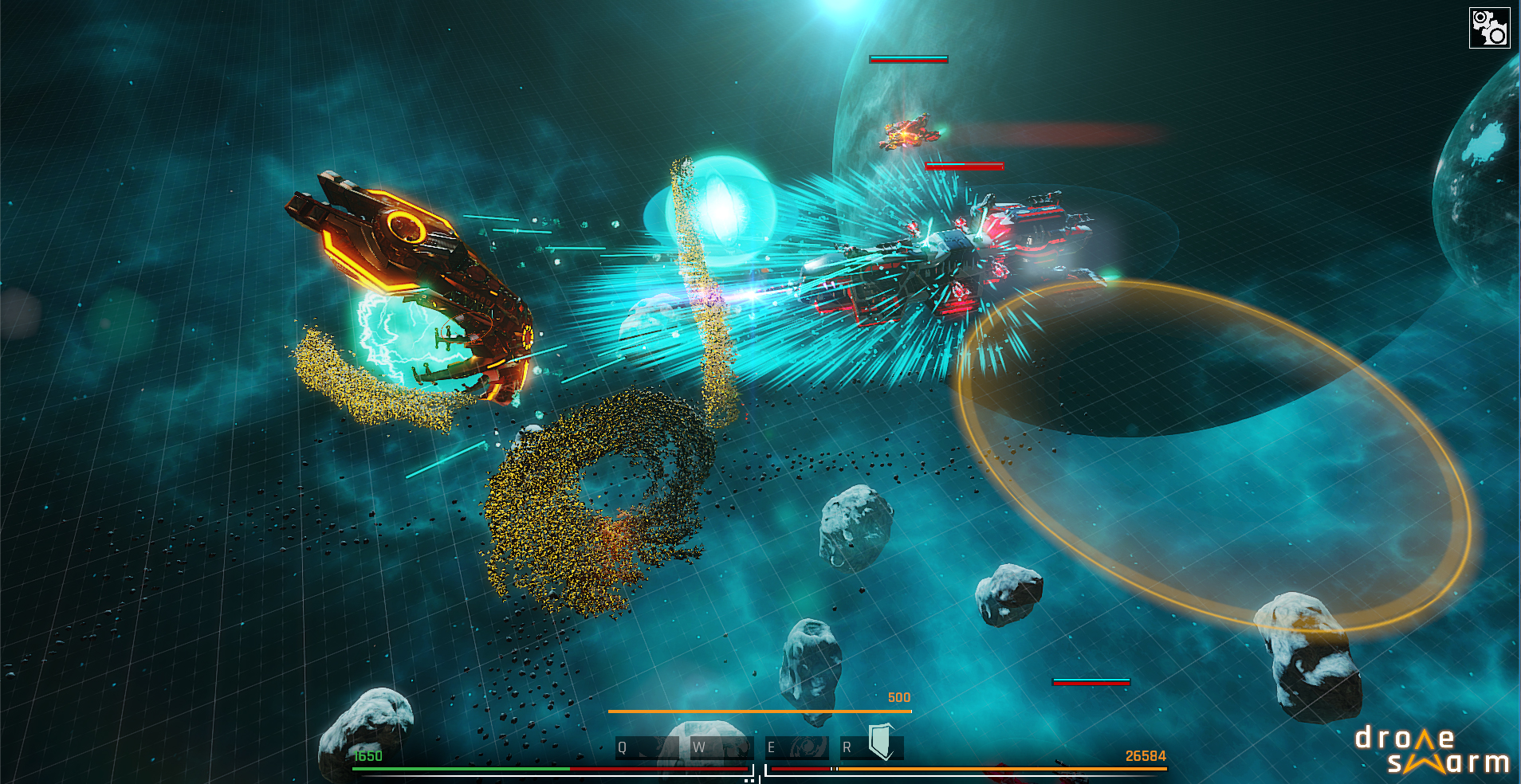 Articy: Please introduce yourself and tell us about stillalive studios

Julian Mautner – CEO & Lead Developer stillalive studios : Hey, I am Julian, I am the lead developer of stillalive studios. Stillalive has been started in 2012 and from then on we have been busy at developing games, starting with Son of Nor, our action adventure, and then going from there very community aware and very close to the community, and now with our new baby Drone Swarm.

Articy: What kind of game is Drone Swarm? How is it coming along, as it has been a bit quiet lately?

Julian: Yeah, that is absolutely true, we have been quiet recently, because we are currently really focusing on the development, and are also experimenting with a couple of new mechanics, and new ways on how to do things. And we did not want to expose that to the community yet, because as long as we do not even feel that it is ready, there is no point in gathering a lot of additional feedback. So I would rather wait until we have that core foundation there and then go full steam with the support of the community and make the game better from there.

The game itself, for those who do not know yet, is about drones, obviously. You are controlling a huge swarm of 32.000 drones, every single drone being individually simulated in the game. It is a strategy game with a strong story component as well, which is very important, because I think that is what really gives the game a frame of reference and a purpose. I think that is something we definitely need. And that is also our primary goal, to have a strong strategy game with a unique component, which is the swarm, combined with an interesting story with meaningful choices, almost adventure-like. So back to our roots with action adventure Son of Nor.

Articy: Why is story so important?

Julian: The story is very, very important, because it gives the player a clear feel of progression for one sake and on the other hand it gives a nice frame of reference to everything you do in a game. Think XCOM, think Starcraft, those are all memorable games, because they have a story to it. It is not because some mechanics worked awesomely, but how those mechanics work greatly within the story and the context of the game and make sense. That is what drives you forward as a player, it motivates you on one hand and on the other hand that is the thing that stays in mind. That is the thing that people will remember.

Articy: Did you write the story for Drone Swarm?

Julian: No, not at all. We are good at making games, we are no authors or very knowledgeable writers. And I think it is an important part of acknowledging that fact. We are working very closely with Aron ??? (3:48) who was the lead writer of Star Wars The Old Republic, and with 451 Media Group and we are using their expertise, of course building the game ourselves, but using their expertise to drive story, to create the story, and to make it awesome basically.

Articy: Was the story the first part of the game you used articy:draft for?

Julian: Initially that was the whole idea, why we even started considering articy for the project, but we very early saw that articy offered us more in that regard, especially as it includes the scripting language, which is super helpful. Therefore we started to integrate the whole articy export into our Unity game and using that data we could not only drive the dialogues, but also basically represent all the quests and missions of the game inside articy and connect them and do the logic calculations and what-not, like changes in reputation when you give a bad answer and the reputation then affect other answers, and on the other hand it unlocks certain branches that lead to new missions and stuff like that.

Articy: Have you found other areas of application for articy:draft during development?

Julian: There was actually quite some evolution involved with how we used articy. First, as I said, we wanted to just use it with dialogues. Then we expanded it with logic and everything. And then we suddenly realized that we could go way beyond this. Because ultimately we would like to have the designers put in their time mostly in articy, and having there a lot of tools they can use to develop the whole game. And since the story is tightly correlated with how the galaxy map, where the player will jump from system to system, is set up, and where what races are, and what happens if you go to Alpha Centauri and meet a new alien guy there, stuff like that. Since that is all very tightly connected, we felt we could even have the whole galaxy map inside articy. So we have now a map location inside articy which is representing the galaxy map and the actual galaxy map inside the game is taking that data and generating the galaxy map out of it. We are not having the galaxy map in Unity at all during development, but really just out of articy. The designers can then in the galaxy map design for every single system, its name, its properties, its ownership, what aliens live there, what encounters are possible, what story trees can happen there, what quests are triggered, what quests are returned, etc. That’s really the whole meta-game is designed in articy now. No need to go into Unity at all, you just export it and there you have it. And only the part where it gets to the combat itself, like what enemy ships are there, what encounters are triggered, etc, that is handled in Unity still, since there is no upside in using articy for that stuff in our game.

Articy: How did you integrate articy:draft into Unity?

Julian: We started with the development rather early and back then there was no Unity plugin of articy. There was just this articy:access, which honestly was a bit of a pain to integrate, but now we changed it, since the new articy plugin for Unity was released and that one made it a hell lot easier to work with. Basically the whole code that we had before could be almost entirely scrapped out and replaced by very elegant and easy solutions. Now it is a lot better and easier to maintain.

Articy: What was the biggest challenge you faced at the beginning of the project?

Julian: The biggest challenge obviously were the drones, the swarm. It is a technical innovation I would call it, there is basically no games featuring a full-blown swarm. There are certain hurdles you have to take. The biggest one, actually, is getting the data and the interaction of the drones back to the CPU, since we are simulating the entire swarm on the GPU to get the raw power of the GPU, we need to get the data back for AI, for player UI, for player feedback, for effects, for damage calculation, etc. We have to get a lot of data back. This getting data back from the GPU is taking quite some time, not in terms of development only, but I am really talking about performance. We had to find ways to, for once, reduce the size of the data we need to get back, and secondly optimize the way how it is read back, and therefore invest a lot of time and a lot of research.

Articy: Have you encountered other challenges during development?

Julian: Yes, there were new problems. Especially, we underestimated the fact that Drone Swarm is a completely new concept. There is no game like it. Which might sound awesome at first glance, because yeah you have a unique game, but the big downside is you cannot go and look at the market and say okay, there are several proven mechanics that we can just use. If I do an RPG or what-not I would have an inventory system and that inventory system will just work. For Drone Swarm we struggled very much with the controls. Struggle is maybe the wrong word, but I think it is a huge challenge to make them as intuitive as possible. So that is what we are currently really focusing on, that is why we are a little quieter than usual. Because we are now developing… or we have been experimenting a lot with new control schemes that are just more natural, more intuitive, and that has taken quite some time.

Articy: Why should every gamer interested in strategy games take a look at Drone Swarm?

Julian: Because it is a new way of doing strategy games! The swarm just allows you to be way more creative when it comes to battles. It is less about micro management and selecting every single drone, but more like what can I do with a swarm that I cannot do with anything else, like building up a wall in any shape you want, drilling through enemies, pushing enemies, but not just with one drone, or just enveloping enemies. You can do way more stuff and that is, I think, something that is absolutely new to the strategy genre, and something that a strategy gamer very much will like to try out.

Articy: There is talk of a Drone Swarm graphic novel or TV-series. Can you tell us more about that?

Julian: We have been signing this agreement with 451 Media Group, which is basically a Michael Bay company. They provide us with this talent pool, as I already mentioned earlier, with this talent pool of awesome writers. And this is going to influence Drone Swarm especially on the story side of things, the gameplay not so much obviously, and there will be an off-spin also for a visual novel. And maybe in the future even stuff beyond that, like TV-series, like feature film, etc. But that is something that is yet to be seen.

Thanks to stillalive studios for having us over.