Today we are going behind the scenes of The Executioner, a narrative game set in a Medieval, dark and unsettling world that puts players in a position to ask themselves questions they would never be faced with in today’s life. Players assume the role of the newly appointed Royal Executioner, trying to retain his sanity while faced with hard moral choices that have consequences on the prisoners, himself and the society.

Articy: Please introduce yourselves and tell us about Lesser Evil Games.

Viacheslav: My name is Viacheslav Kleymenov and I am the leading unity developer in our team.

Elena: My name is Elena Sivakova and I am writer and narrative designer in our team.

Elena: Lesser Evil Games is a small Russian indie studio that we founded a few years ago to try our hand at creating narrative games built around complex and possibly painful themes. The name of the ыtudio comes from the principle formulated by Aristotle, which sounds like “Of two evils, the lesser must always be chosen” — obvious, at first glance, conclusion that is still followed by many in the modern world (especially in politics and business) and is often imposed as an example behavior. However, the principle is false, since it involves the choice of only two obviously bad things. It is because of this contradiction that we use the name “Lesser Evil” and the principle itself in our games.

Articy: How did The Executioner come to be? What was your point of inspiration?

Elena: The idea of “The Executioner” belongs to Fuad. He says it came from an article called “Interesting facts about executioners”. From the descriptions of the problems of the profession, prejudice, and exotic ways of gaining money the idea of the game was born. After that we did a lot of research on this topic and probably the most significant inspiration for us was the description of the Stanley Milgram experiment, ”The Lucifer Effect: Understanding How Good People Turn Evil” by Philip Zimbardo and the movie ”Unthinkable” premiered in 2009. We wanted to talk about the moral dilemmas faced by people who torture and kill in the line of duty and how we did it well is for you to judge.

Articy: Players are faced with a lot of hard choices throughout the story, is the game meant to be a self-discovery experience? What emotions did you wish to instill in the audience?

Elena: Yes, to a significant extent, it’s self discovery. What to do if the choice is between your life and the lives of others. Would I be prepared to face the consequences of my mercy if they were worse than what I was trying to avoid? What is it like to be an executioner after all, and watch people turn into stumps under my hands every day.

We were making horror, despite the fact that the horror usually scares with something external, we wanted to cause terror from inner feelings. In general, few things in the game are scarier than the main character and most of the time we wanted the player to ask the question “Am I really capable of doing this?”.

Articy: The game fuses elements of a traditional RPG with investigation, exploration and moral decision-making. Was it designed like this from the beginning or did it evolve over time?

Elena: For the most part, we managed to keep the vision we started with, for good or ill. The choices in our game required mechanics to put not only the character but also the player at odds when their desire to be good is meaningfully at odds with their ability to live and live well. This required role-playing mechanics and game resources that went beyond the usual interactive novel, so they could be managed with choices. Only combat (conflict) system changed to a large extent for several reasons, going from turn-based tactics to series of choices made by the player, more like in an interactive novel, where the player chooses the strategy of behavior, and the conflict goes by itself.

Articy: How did you manage all the different narrative elements of the game while keeping the story coherent?

Elena: First of all we fixed the plot structure, narrative cores or lines of days when the main plot unfolds and the space for choices at night when the player closes the side storylines and progresses, preparing for the next day.

Then we create the endings to which we want to come, using these endings as base in addition to the more lean plot, “archetypes” of the Executioners were described, i.e. sets of moral qualities and skills to which hero can come under the player guidance and which form a significantly different ending (if you’re wondering it’s 8 of them).

Well, and in the end we just wandered through the text armed with some skill or object and coming up with all sorts of applications.

Then came Persona 5 and we realized that we were reinventing the wheel, its narrative structure of the story was perfect for us… We were of course a little sad about the time we could have potentially saved, but at least we have assembled something unique.

Articy: In what way did you use articy:draft for this project?

Viacheslav: Articy is a convenient tool for visual compilation of plot lines, but we went further – we made sure that all game entities and information about game mechanics were stored in Articy. It was perfect for that. First of all, because the writers and game designers could work in the tool, more accessible for them initially and they did not need to write additional tools in Unity. The “Importer for Unity” asset helped us a lot in the integration. The event system was implemented. Inside Articy we can call the various modules of game (conflict, cutscene, torture, etc.) and move ourselves in the right dialogue after that, depending on how this fragment of the game has been completed and all of this is configured and tested in Articy! This gives great variability to the plot of the game.

Initially we were just organizing the thoughts in the story, and scenes by grouping characters and objects, and estimating a common structure. But with the development of the project, we began to connect more and more features and now Articy actually contains information about all the game mechanics, parameters, objects, torture, etc.

Articy: What was your experience integrating the content into Unity?

Viacheslav: The development team has a lot of experience delivering content to the game. But before this project this experience mainly referred to 3D models and 2D structures and whole mechanics. In this project, the text occupies most of the content and of course the content submission pipelines that were previously unsuitable. We have overcome this challenge. We learned how to quickly submit content to the game without getting stuck at certain steps, to quickly test and fix it.

Articy: What features of articy did you find the most useful? Any tips you care to share with our users?

Elena: Finding errors in “variables”, “conditions” and “jumps” is an awesome feature. It helped us find a huge number of bugs.
Tip #1: write important comments that require a reaction not in the “annotations”, but in non-attached “instructions”, then, when you will search for errors, the comments will be displayed to you. When you have thousands of paragraphs or your teammate will try to find a problem that needs to be fixed, this will help you to not miss an important task.
Tip # 2: is to be careful when commenting in “instructions” and “conditions”, despite the fact that you need to put a comment if the instruction uses a template, otherwise you just won’t understand what it is. Iif you put a comment before this segment is ready, then from the search for errors point of view, the instruction will look normal, but technically at the start of the build it will lead to an error.

Viacheslav: Creating custom templates for various instructions, conditions, characters, everything and restricting type of data that could be used in them. It’s really useful when you need to provide your teammate an error-free tool
Tip: Do not try to make them look perfect, they are only for internal use anyway and it’s not a visual tool so it could be hard to make them shiny. But on the other hand write in their descriptive fields the detailed description of what this field does, after a couple of years of work your memory will thank you, not to mention the other members of the team for not trying to decipher your short comments.

Articy: Is there anything you learned while developing the game that you wish you had known before you started? What advice would you give to developers that are just now starting to work on a narrative game?

Viacheslav: In this particular game, because of its features and the high cost of rewriting text and the inability to painlessly swap texts among themselves, the main advice is: think over pipelines, plot lines, mechanics in advance. After all, the farther you get, the more difficult it is to make changes and the complexity of the changes grows exponentially.

And general tips:
1. Iterate in development of pipelines so often until they will be simple and straightforward.
2. Document everything – this will help you understand what and why you are doing, and will help newly arrived employees. A game design document is not written for others, but for yourself so that there is a complete picture of the project and you understand how the project will be arranged. Documents are living entities, take care of them.
3. Create the project architecture so that you can update any of the game mechanics modules, assets and / or tools independently and you do not have to change your base for this.
4. Introduce proper testing early on. Better automatic testing.

Get The Executioner on steam 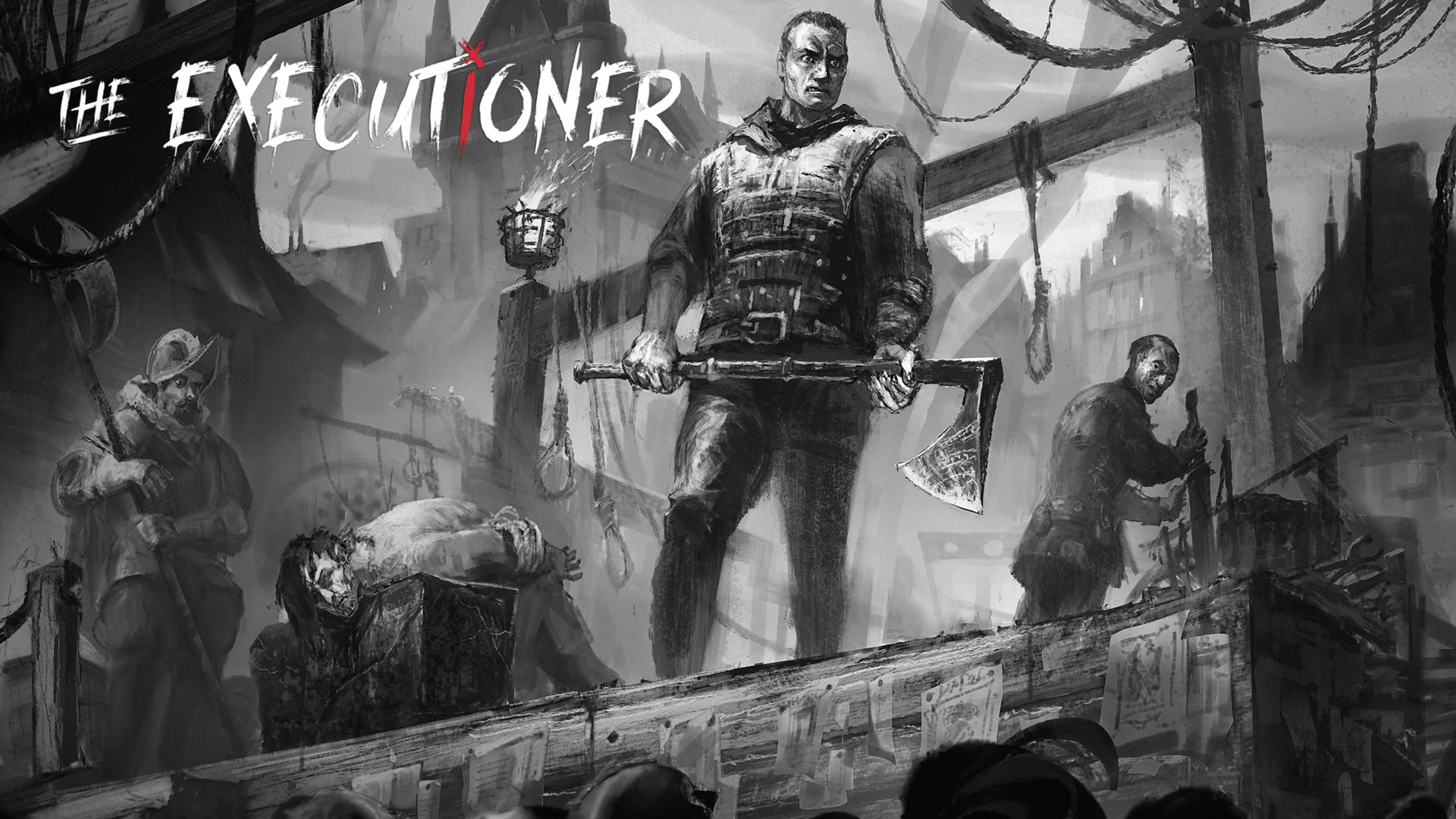