El Presidente is at it again in Tropico 6 bringing the beloved city-building simulator to new heights.

Senior Level Designer Monica Rolke and Senior Content Designer Johannes Pfeiffer met with us at their HQ in Langen and shared some interesting insights: the challenges you face when continuing a well-known and well-liked game IP; the way city builders can be story heavy; and how previous experiences with articy:draft for Might and Magic X Legacy made them bring it to the table again for Tropico 6, to assist them in their development process.

Watch the video or read on to find out what we learned:

Articy: Tropico 6 is Limbic’s first Tropico game. How much creative freedom did you have on this project?

Johannes Pfeifer – Senior Content Designer: I think quite some, but still it’s important to match the actual heart of a Tropico game. So of course Kalypso is quite eager, and we are as well, that you have that core, that heart, right of what makes a Tropico game. Of course, it’s a beloved city builder series with this typical tongue-in-cheek humor, which is a bit of a trademark of the game. But around this is quite some potential freedom we have for the designs, that we wanted to bring in, that we can bring in, which were also part of the pitch that we delivered. That we say, okay, we want to take these core elements as they are and on this side, like with the islands, the archipelagos setup, we want to go a step further and introduce some new mechanics like raids and world wonders that you have. Just certain extensions of some core elements, where we can go in a certain direction, but of course it is then a close collaboration with the publisher, that we work in some guidelines or boundaries they give us.

Articy: Was it a big challenge to continue a well-liked series? Is a strong IP a curse or a blessing?

Johannes: I think it’s both. We did it before with Heroes (Might & Magic Heroes VII) as well. I think there is some experience.

Monica Rolke – Senior Level Designer: From a level design perspective it is actually good to have a strong IP, because you already know where the journey will go. You know how the camera will look like, you know what kind of quests are presented and in what kind of style. You can add on to those things and make it even better than previous installments.

Johannes: There is quite some reference and things: Material, sometimes lore and history you can build on. But you also have these expectations of players that have a pretty clear picture of how the next installment should look like and how it will look like. And the question is, how much can you deviate, because you might also fall short in the trap, yeah, it is basically the same as before. Striking the right balance is quite an interesting and challenging topic. But it is also fun to have these challenges, especially coming from the visual side to build these worlds that feel familiar, but still have this new and interesting and appealing touch.

Articy: Can you tell us what makes Tropico 6 a must play in the Tropico series?

Johannes: I think it’s our core idea and what we want to strike on is that is feels like a real Tropico. So we really paid close attention to what players liked from previous installments, and taking the best out of it, what we thought, what we heard from them, and also what Kalypso brought in. So that we have several elements like the era system from Tropico 5, the work modes and election speeches from Tropico 4, and aside from some other elements, we built upon this, taking it from one island to multiple islands, a whole archipelago, finally realising that El Presidente needs of course more than just one island, and adding some other more cheeky or bold actions like these raids and heists. That you can steal landmarks and world wonders, which gives it, I think, a pretty interesting spin.

Articy: What was the initial reasoning to use articy:draft for this project? Did anyone from the team had prior experience with the tool?

Johannes: We both had, actually.

Monica: Early when we started at Limbic, there were some drafts already done with articy:draft, like showing a story flow, and later on we introduced it again for Tropico 6 to use it.

Johannes: And I remember it quite vividly, when we had, like back in our level design room, this massive white wall where it started, printing out mission sheets, connecting them with red wire – literally, and we said “Okay, we need to move to a digital format with Legacy (Might & Magic X Legacy).” And knowing from where we were coming then, we evaluated if it would work for Tropico, and we decided to go for it especially because we were working together with an external writing team, and there the collaboration coordination makes it easier if you have that one clear tool that allows you to have access to from different parts, versioning, and one clear go-to point for all text you want to store and manage.

Articy: So you are primarily using articy:draft for the texts in the game?

Monica: Actually, for Tropico 6 it is not just texts and story, because our story is related to the quests, so we put in also the quest objectives and tasks and also what you get out as a reward from those quests you do. And also, we have different quests and notifications, like raids have their different pop-ups, so we wanted to use articy:draft to also showcase this and have a quick overview of what is happening actually.

Johannes: I think for a city builder we are quite story heavy and have different elements, which require different kinds of text. And for one to store them, but also to have a good visualization of what type of text is it, how can you link it, and how can certain elements be combined, was one of the reasons we went for articy. 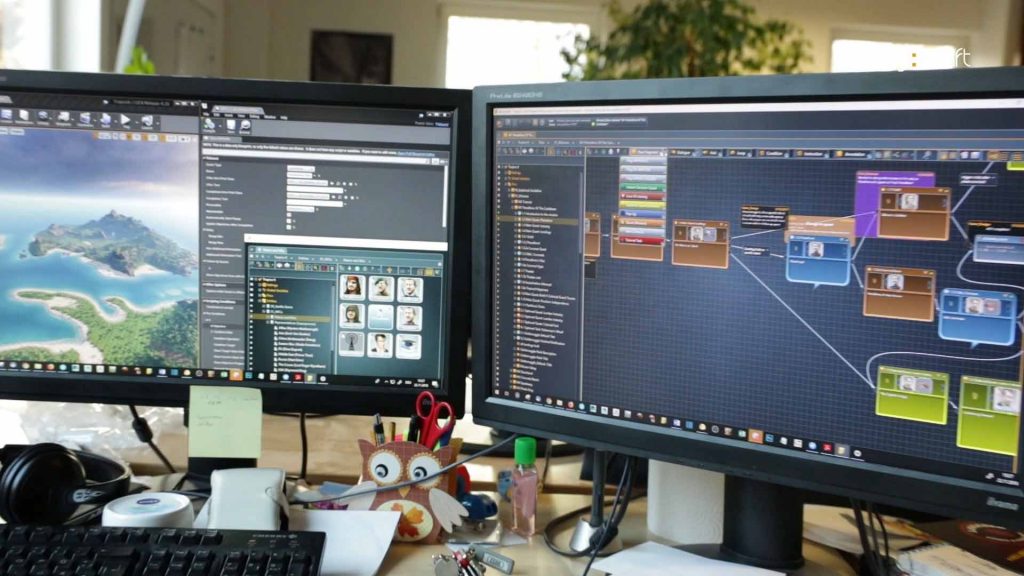 Articy: How do you use articy:draft in your daily work?

Monica: When we got an idea how the quest should look like, we would make all the boxes in articy:draft and also all the dialogues already with the right speakers in it, and there blank in the first place. Then we export it to the writers, so the writers can work in their favorite writing application to just fill it out. Then we re-import it to articy:draft. Then the level design goes in and checks everything is done, so we can implement it in the Unreal Engine, and also link it then with localization key so we have the text in Unreal Engine and the game.

Johannes: And of course, there in the very first setup quite an interesting challenge for us was how do we define these certain text boxes, flow fragments, and so on; create certain templates and features that work the way we needed to have, and work with the custom tool we use to bring it into the engine. And then coming from that it is the daily work as Monica described it.

Articy: What is your personal favorite part of the game?

Johannes: So many. You want to start?

Monica: Actually, I like a lot when you finally reach the end era, basically the modern times, and then you are really free to do everything. Like, you can make your really green country, and you can place everything you want. So usually I would have already a lot of money stacked for this, I demolish everything I don’t want and then place new buildings and it looks exactly like I want. That is what I enjoy the most.

Johannes: For me it is, bit of like a combination of certain fun features. Because Tropico is this light-hearted entertainment, so we had some moments where you were stealing a world wonder, like the Eiffel tower basically coming flying in, you see in the foreground a small character, because all of our Tropicans are fully, was just about to rob a drunk person who just came out of a bar, while this massive monument in the background was visible. Just these small little moments you experience in the game when you are watching closely, that is, I think, for me a big thing where to draw some joy from definitely.

Get Tropico 6 on Steam