We all need a good break sometimes and with the travels being somewhat of a hassle nowadays, we’ve lately found ourselves escaping all the way to beautiful Providence Oaks, with its iconic lake and quirky community. You’ve guessed it – it’s our playcation destination over in #MadeWithArticy game Lake. We’ve always wondered how did the idea of the beautiful, rustic environment and serene atmosphere make its way into the game so we were happy to get behind the scenes with game director Dylan who generously answered all our questions about the story and development of Lake. Read on to see what we found out.

Articy: Please introduce yourselves and tell us about the team behind Gamious

Dylan Nagel: Hello! I’m Dylan Nagel, game director on Lake. Gamious is an independent game studio in Haarlem, The Netherlands, most known for Turmoil. During production of Lake, we frequently expanded our core team with a number of external professionals such as writers, 3d modellers, animators, sound designers and voice actors.

Articy: It is refreshing to see a game coming out that deliberately slows down the pace and makes one stop and appreciate the tranquility. Where did the idea for Lake originate from?

Dylan Nagel: The original idea was the exact opposite: a fast-paced game in which players had to deliver a number of packages as quickly as possible! While doing research for my pitch to Gamious, I came across an amazing picture of a lake, a winding road around it with a single car driving by, and a mountain in the distance. I immediately knew this would make for a much more interesting experience – I wanted to be in that car, driving on that road around the lake.

Articy: The relaxing atmosphere of Lake is wonderfully complemented by its beautiful art style and soundtrack. Please, tell us a bit about the journey you have taken until the game looked and felt the way it is doing now?

Dylan Nagel: It was a long journey, haha! Our initial team consisted of myself as designer, our lead programmer Luc Schols, and our lead environment and technical artist Jonathan van Immerzeel. In the first few months we would try out a lot of different styles for our game world. For me personally, I think we finally found our focus when character concept artist and art director Sonja van Vuure joined us. As soon as we saw who the game would be about, the rest of the art style and the vibe followed naturally.
And even then, as a small team we had to stay humble about what we could do. That reality certainly influenced our decision to let the story take place in a small, quiet town in the mid 1980’s. Luckily, that only strengthened the core concept.

Articy: Lake is set in the ‘80s and spans two weeks of branching story. Can you give us any insights on how you approached the writing for the game? Was it hard to keep track of the evolving arcs of all characters? And did you watch a lot of ‘80s movies?

Dylan Nagel: We started with a bottom-up approach, and at some point changed to top-down. Meaning that initially we came up with a list of interesting and relatable characters and wrote short dialogues for a number of them. This also allowed us to quickly iterate on the game’s design – written words could be implemented within a few days, or sometimes even the very same day.

As soon as we better understood what worked and what didn’t, creative director and lead writer Jos Bouman and I created a big overview of the two in-game weeks to map out all the various character arcs. 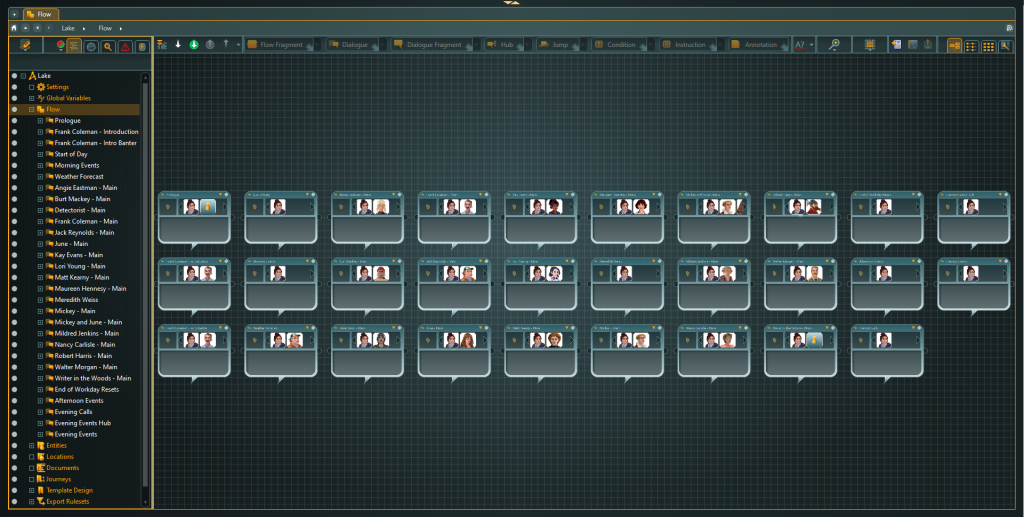 We divided all of the stories in the game over a handful of writers, or rather: they each grabbed whichever characters they loved the most! Of course there was a lot of going back and forth between them as each dialogue was reviewed, polished or sometimes rewritten entirely.

The big narrative overview (a whiteboard with magnetic rewritable labels, later turned into an online spreadsheet), kept us sane, but yeah, it was quite a challenge to keep track of everything! Even shifting one or two conversations around in the schedule sometimes caused issues further down the line.

And even though a number of our team grew up in the 1980’s, we did rewatch a number of movies and tv series from that decade! There’s such an incredible mood of independence and up to a point: optimism in those films. It felt as if the characters in those stories could do anything, overcome any challenges the world would throw at them. Especially some of the character development arcs were magically inspiring as a kid. And of course looking back, the 80’s now feel as ‘a simpler time’.

Articy: At which point in development did you decide you need to use a professional tool and what made you opt for articy:draft?

Dylan Nagel: Incidentally, I had come across articy:draft a few weeks before the start of the project. When I saw it for the first time I instantly wanted to use it in a production. I even made a very small demo project just to understand its potential, and the technical pipeline from articy into Unity. When that proved fairly straightforward, it was an easy decision to use it for Lake as well. It’s been a central part of the production ever since.

Dylan Nagel: It allowed us to make our game. Without it, we probably wouldn’t have made Lake, and certainly not in the way we did. Probably the biggest impact articy had on our production process was to show our writers concrete examples of branching storylines.

Within days, they fully grasped the concept and got a solid understanding of the desired length of the conversations in Lake, as well as the number of branches at any given point.
Of course it also greatly helped us organize thousands of lines divided over 20+ characters!

Articy: What features of articy:draft did you use the most and how?

Dylan Nagel: Truth be told, our writers mostly wrote their dialogues in Google Docs to be able to iterate quickly, work from anywhere and share their work between one another as easily as possible. As soon as any given text was as good as it could be, we would enter it into articy:draft.

Usually this (manual) conversion process already brought to light a number of issues, which could then be quickly fixed. We would often use Presentation Mode to preview newly added dialogues to see if they flowed smoothly and make on the spot adjustments if needed.

Lake has a large number of variables used to track the player’s progress in the game, from having delivered their first letter to making their final choice at the end of the game. However simple in concept and perhaps execution, being able to drive branching storylines within articy:draft using variables is probably its most powerful feature. 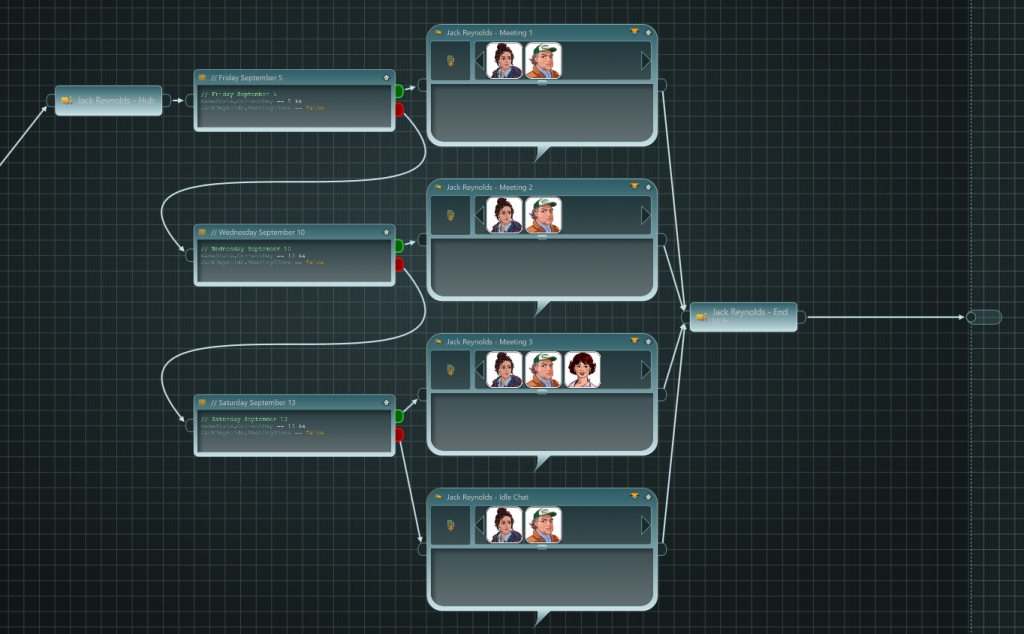 We also created a lot of custom commands to control many aspects of the game, such as camerashots and character placement and animations. These commands were added in the stage directions and expression fields, exported to Unity, and picked up in the Dialogue System plug-in, which we greatly expanded upon as well.

Finally, we made extensive use of the voice over plug-in for articy. With a press of a button, placeholder sound files were created that we could later replace with performances recorded by professional voice actors.

Articy: If you were to give a small piece of wisdom to a new studio, what would that be?

Dylan Nagel: Allow yourself to have fun while making your game! Reserve time to dive in, play around, test things out before deciding what it is you want to make exactly. Be inspired by the tools at your disposal, whether that’s a paintbrush or articy:draft. Figure out what can be done and what can’t. Then try to figure out how to do it as efficiently as possible – much of the heavy lifting can be automated if you’re smart about it.
Finally, be in awe of the people on your team, and let them know you admire their work whenever you can.

On Steam On Xbox 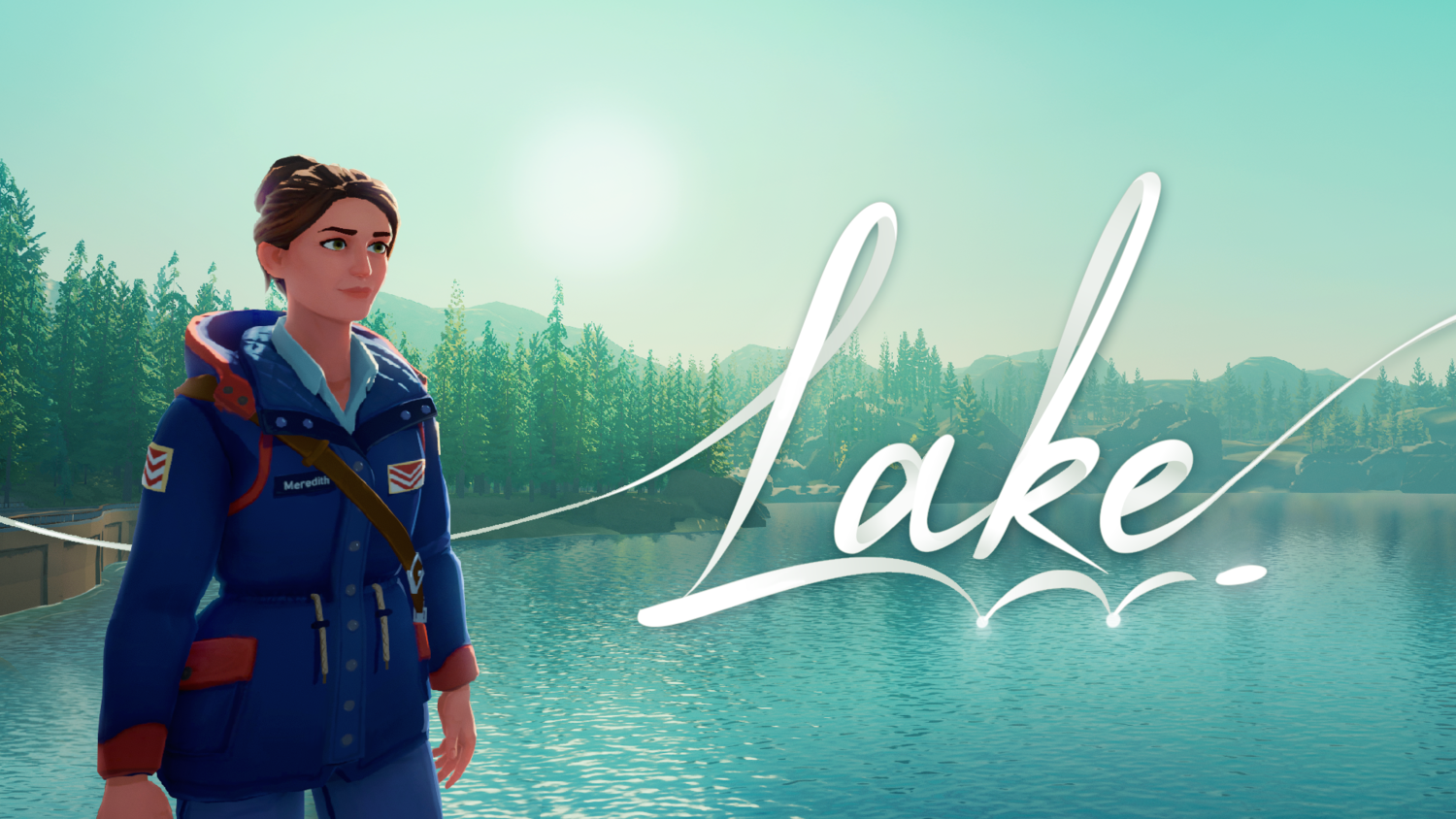 Want to try out our narrative design tool?
Try articy:draft for Free
*No Payment information required