Interview: Nicolas Samuel, SureAI: “While ambition is good, overambition can kill a project”

This is the second part of the chat we’ve had with Nicolas Samuel, Project Lead at SureAI. In the previous part, which you can find here, he talked with us about how you can keep up the motivation in a non commercial project and bring it across the finish line. In this next part Nicolas shares with us issues that, in his opinion, went good or bad during development. And he concludes with tips that modders or gamedevs in general should keep in mind, if they want their project to see the light of day.

Articy: Can you give us examples for things that went absolutely alright and exactly as planned?

Nicolas Samuel: The localization. Even though we had some actors jump ship after they had agreed to do one or more roles for us, both the German and the English version went down a lot better than we had expected. We especially had doubts about whether the English localization would be en-par with the German one, which is why we weren‘t even sure there would be one in the first place. In the end, even though it was a lot of work, we had all the recordings a lot quicker than expected (we thought that the English version fo Enderal were to release sometime around fall 2016.)

Articy: Are there also examples for the other side of the coin? Areas that went horrible wrong while in development?

Nicolas Samuel: We wasted a lot of time on features that should have been nice-to-have to begin with. That was mainly my fault, as I was so invested in them that I wanted to have them at all cost – a good example is the real-time fast traveling system. I think, in the end, we sunk about almost 150 man-hours into it, only to realize that the game would always crash when flying over areas with a big object count. If we were to do everything again, we would definitely prioritize even more.

Articy: Enderal – Shards of Order is complex. Content-wise: Is there anything that didn’t make it in the mod?

Nicolas Samuel: Yeah, definitely. I wrote a small post in our forums about all these stories that didn‘t make it in-game. The biggest loss, in my opinion, was the „Rhalâta“ questline that revolves around the eponymous cult that rules the Undercity, an underground slum below the city of Ark. Also, a lot of quests that would have tied up some loose ends had to be cut – for example, one that allowed the player to participate in an investigation after the murder of an important main character. However, the good news is that there are plans to implement that missing content eventually.

I usually start out with a rough draft, and split them up into individual scenes.

Articy: What is your process of writing such a complex story? Do you start with the main „route“ and then fill the branches? 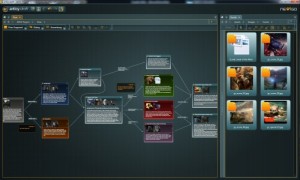 Nicolas Samuel: Yes, more or less. I usually start out with a rough draft of a quest or a narrative, and split them up into individual scenes. At that point, all I have is a rough idea of what I want to happen, both gameplay and story-wise, and of the emotions I want to come across – the theme, if you want. I talk to our level and game designers, and, if they have no objections, I start writing the scenes, one after the other. By the time I have arrived at the or one of the endings of that narrative, I already have a much clearer idea of the story. After that, I simply go over the scenes again, and after that, again, this time with a stronger focus on the technical aspects of the writing. Usually the dialogue gets a lot shorter and more “down-to-earth” after this iteration. I use this technique on every level – that is, for a single conversation, a single quest, or even an entire quest-line, or the main-quest. To me, iteration is the key. Articy was priceless in terms of keeping an overview, and was particularly helpful with the writing and design of non-linear quests and complex dialogue trees – when using a standard text-processing software, you usually end up with a bunch of documents which makes it hard to maintain consistency throughout the script.

Articy: What part – writing-wise – do you like the most in Enderal?

Nicolas Samuel: Good question. I think I‘m particularly happy with the main companions, Jespar and Calia, and their personal storylines, as well as with the more morbid/surreal parts of the scripts, such as the dream sequences. Also, I’m happy with the overall feel we created – even though Enderal’s story certainly isn’t perfect, there’s a strong feeling of theme that shows in almost every piece of writing in the game world, from big story missions to idle chatter.

Articy: What are the lessons you’ve learned during the whole project. Anything you like to share with other modders or gamedevs?

Intrinsical motivation is the most powerful asset in creative work. 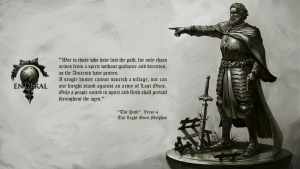 Nicolas Samuel: A couple of things, but most of them have probably been said before: Mainly, while ambition is good, overambition can kill a project. In my experience, it is extremely important to stay realistic, especially in modding, where people tend to go completely overboard with what they want to realize – know what you and your team is capable of, otherwise you‘re going to waste a lot of time (and money). In terms of writing, I personally learned that theory can only take you so far. When I started out, I read a lot of books on how to construct and write good stories, and so on, and so forth, and while these theories might be useful for some, every good scene I personally wrote, and, more importantly, every scene that got to the players emotionally, was created intuitively. I know that this approach might not be applicable in commercial game development (especially for AAA productions), where producers tend to want a clear analysis of why this character and that scene is something players will enjoy, but looking back, I personally wished that I would have spent less time on reading narrative theory rather than just writing and revising. I think, if you want a story to have emotional impact, you as the writer has to be the first person to be impacted, as stupid as it may sound. You can research and theorize all you want, but in the end, if you don’t believe your own characters, if you don’t feel their inner struggles, the players won’t believe them either. It’s simple logic.

Finally, working in a production where there was almost no way to extrinsically motivate the people involved (apart from using Enderal as a portfolio project), I learnt that intrinsical motivation is the most powerful asset in creative work. While it was very challenging at times, I was, for example, amazed by the amount of passion some contributors put into their work, especially some of the already high-profile voice actors who had no „rational“ reason to participate in Enderal and who simply helped us because they liked the project and the writing. And while Enderal can absolutely not compete with a true AAA title in terms of overall production value, I think this passion can make up for a lot.

Articy: What’s next for you?

Nicolas Samuel: Next up for me personally are several projects. I‘ve just finished writing the first draft of my Mystey/Horror novel for which I will be looking for a publisher next year. We are also currently planning and working on new content for Enderal, which will be announced soon. As for what comes after that – we will see.

Articy: Thanks a lot for sharing this information with us Nicolas. We wish you a bright future for all your coming projects.